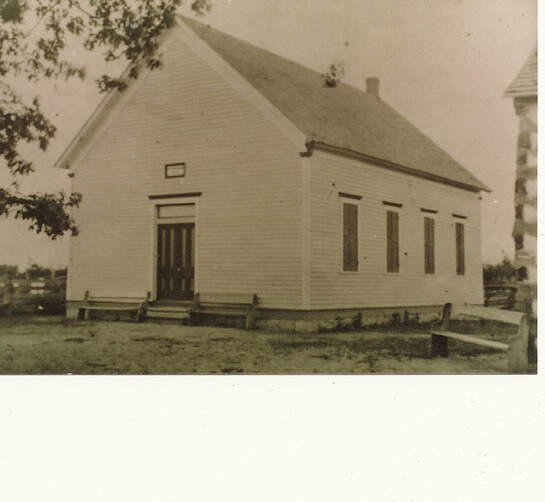 Early settlers began arriving in the Bem area from Germany in the mid 1840’s, bringing with them their strong faith in God. Here in Southern Gasconade County, they found creeks and rivers with rich soil and acres of hardwood forests. They farmed, became blacksmiths and wheelwrights, and faced good times and bad.
From letters of the early missionaries of the 1850’s, it appears that preaching services were conducted in the Bem community. Men like Pastor August Rauschenbusch and Pastor Koewing, who were  then located in the Mt. Sterling area, wrote of preaching missions in the southern part of the county, Bem being the likely location.
On March 1, 1869, Arminda Hulvey transferred her inheritance of an 80 acre tract of land to the three trustees of the German Evangelical Lutheran Church at Bem: Hermann Oberkrome, Frederick Drusch, and Gottfried Enke, for $25.00.  On May 29, 1869, Arminda’s brother, Thomas Graham, who was guardian of the Hulvey children, conveyed their interest in the property to the trustees for $100.00.
The first congregation in 1869 listed itself as St. John’s Lutheran Church, but distinctions between the Lutherans and German Evangelicals were blurry. In 1878, with a majority vote of  the congregation, members formally allied themselves with the German Evangelical Church known as the Kirchenverein of the West.
Records, written in German, of Evangelische St. Johanies Geminde zu Bem (Evangelical St. John’s Congregation at Bem) begin in 1878.  If tradition is to be believed, the records of the church’s earlier years lie forever buried in the rocks and sand of Dry Fork Creek. According to an old story, the circuit-riding pastor upset his buggy and so lost the written records of the early congregation.
A building committee and cemetery were organized in 1870.  Members cut and gathered logs and erected the first church building. The first Constitution (called a “Parish Decree”) was signed by 29 male members on February 10,1878 (women were allowed membership in 1938).  In 1886, Rev. M. Kruse assumed the pastorate, and the old log church gave way to a frame sanctuary dedicated in December of 1887. A two story parsonage was erected behind the church building in 1888. In 1891 German was falling out of favor in light of the war, and English was introduced in the Sunday School.
​     Church Picnics have long been a tradition that continues today, and that hospitality extends beyond the Owensville and Cuba area.  St. John’s is mission oriented in our local communities and the wider world. Through members’ contributions, the congregation dug a well in Kenya, built a school in Jamaica, and constructed a medical facility at the UCC outdoor center in Union, MO, Camp Mo-Val.  Bem Church is also a large regular contributor to CROP and the local food pantry.
St. John’s has twice yoked with St. Peter’s, Owensville (and been independent since 1980), and enjoys its ecumenical partnerships with neighboring churches.The church building has been renovated and expanded, and stands today as a monument of faith to those who labored long and hard to establish a religious community here.  As we celebrate our 150th year, relying on God’s grace, we salute the past with its foundations of generosity, faith, hope and love, and rededicate ourselves anew to continuing the ministry of our Lord Jesus Christ in this historic place and this new day.