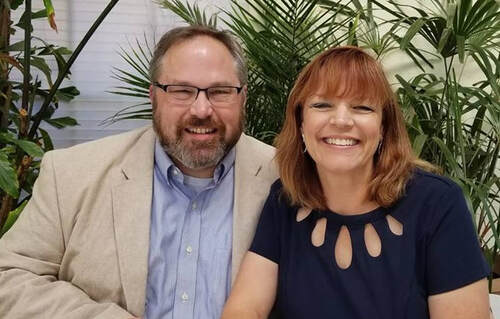 Supply Pastor Jeff Remelius and wife Jeanne
While serving St. John's, Jeff will continue taking classes as part of the LIFE at Eden program.  He is pursuing ordination through the new alternative paths to ministry process outlined in the new UCC Manual on Ministry.
After 26 years as a teacher and administrator in the Affton School District, Jeff took early retirement.  Most of Jeff's career he was at Rogers Middle School.  He started as a teacher there and then served as an Assistant Principal for 5 years and as Principal for 9 years.  He finished his career as the Director of Academic Options, where he founded the Finish Strong Academy, an alternative program.
​
Jeff and his wife Jeanne have been married for almost 24 years.  After a career as an attorney, Jeanne has just begun her first year in education.  She is an English teacher at Oakville High School in South St. Louis County.  They have 2 boys, Zach, in his senior year at Western Illinois University in Macomb, and Justin, a junior at Arizona State University in Tempe.

Jeff is a life-long member of Grace United Church of Christ in south St. Louis City.  At Grace he has served as president of the consistory for more years than he can remember and as co-chair of their last Pastoral Search Committee.  Jeff is the facilitator for the South St. Louis UCC Collaborative, a group of 7 UCC churches that have begun working together and supporting each other's ministries.  He is also president of the St. Louis Association Council.  He served as chair of the technology committee for this year’s Conference Annual Gathering. He is very excited about beginning his ministry with Bem Church.